Are you finding it difficult to know your Logic App Run Action Failures?

This use case is a simplified version of a production level issue faced by one of our potential customers. They have a logic app playing a critical role in their business orchestration. The problem is that they are not aware of a failure in one of the Run Actions in the Logic App. A specific run action is failing due to OAuth token not being refreshed as expected from the authentication provider.

Hence, we proposed a solution to this scenario through the ‘Watch’ monitoring feature in Serverless360. 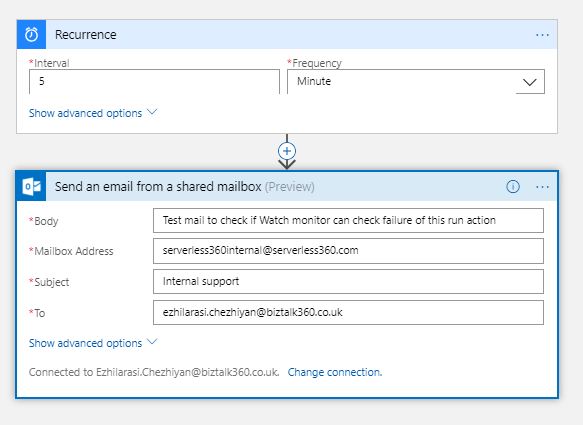 This Logic App is now associated with Serverless360 Composite Application and ‘Watch’ monitoring is enabled. From this moment the Logic App will be continuously watched, an alert will be forwarded to the configured notification channels within in 5 minutes of the failure (this is the default notification frequency in Serverless360, not to be confused with the Logic App Frequency set above).

This logic app is expected to trigger email to the recipient email at a frequency of 5 minutes. Unlike what the customer was mentioning, we did not face any failure in the logic app run actions. The OAuth token in our case was refreshed properly.

Hence, we forced the workflow to create an OAuth error. Therefore we can check if Serverless360 ‘Watch’ monitor can generate an alert. So we removed the API connection that will be used by the logic app to get the OAuth token. Now the attempt to get the token should fail for sure, and in turn, the run action will fail. As a result, we received a Logic Apps watch monitor alert from Serverless360 – “Failure report of Logic App, EmailProcessor”. 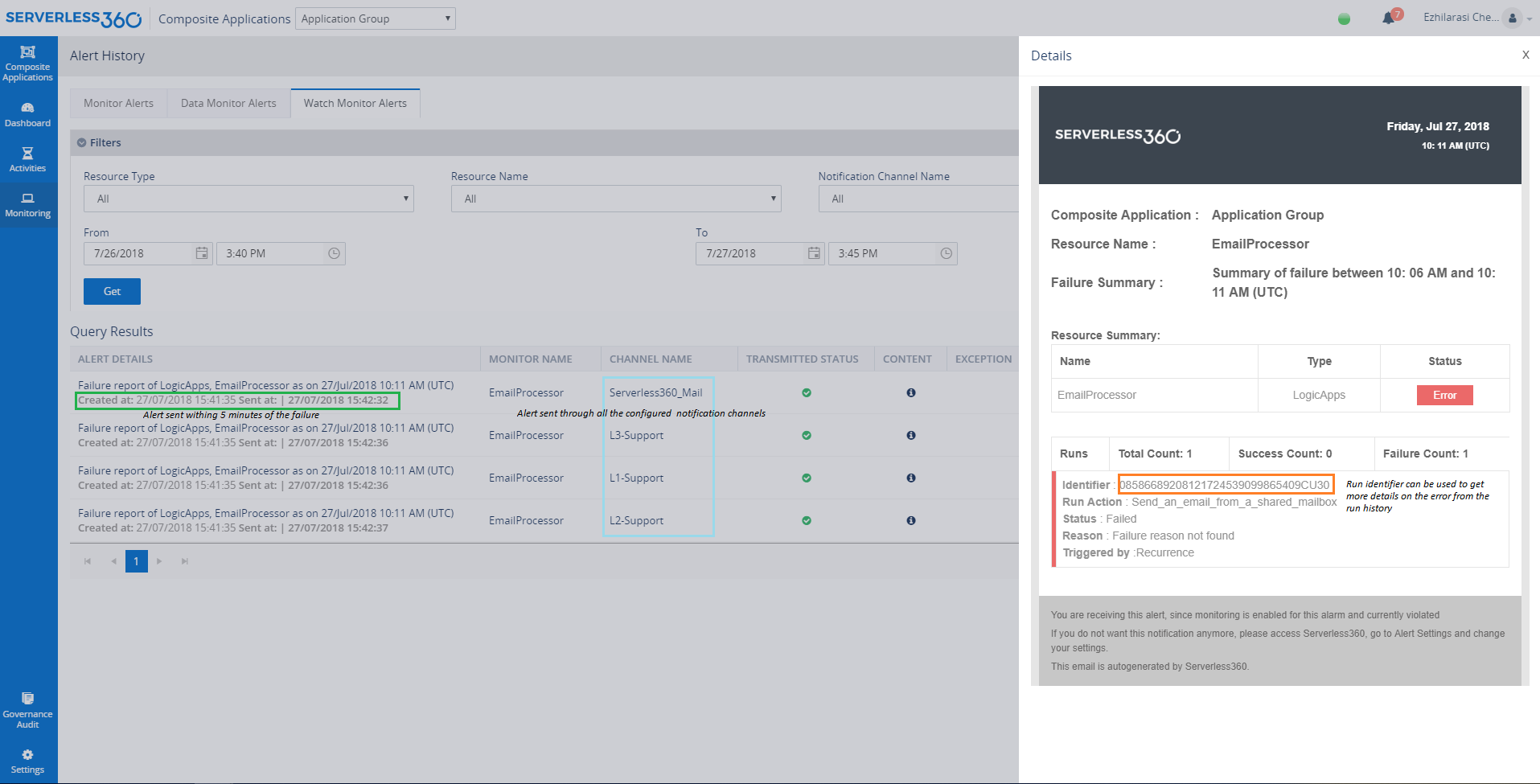 With Serverless360 you can get more clarity on the failure by looking deep into the run history of the logic app and identify the run with the run identifier. The output of the failed run action will have the failure reason in detail. 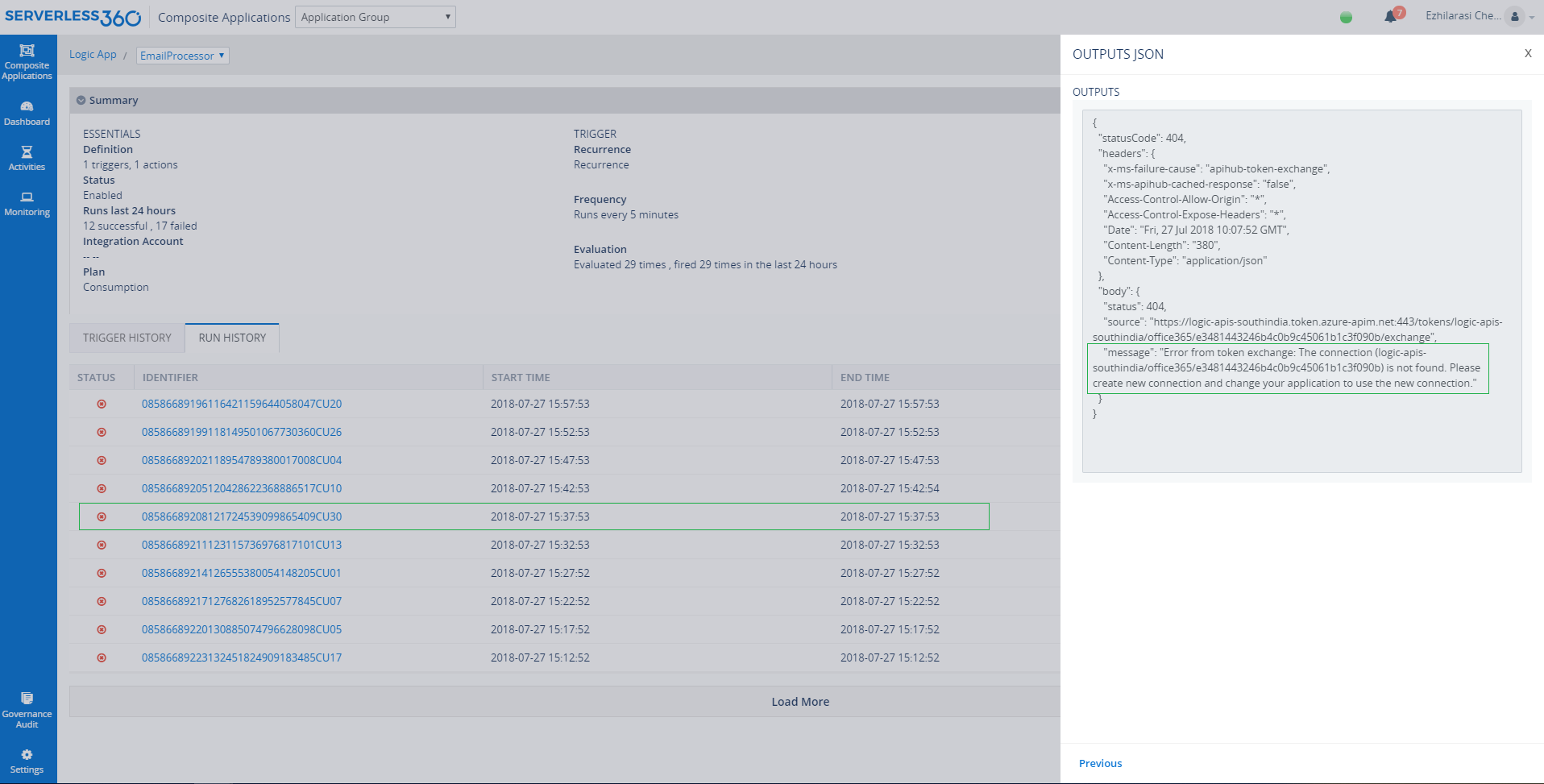 The Logic Apps watch monitor detected the failure and generated the alert at 2018-07-27 15:41:35 and most importantly, the alert is forwarded to the Notification Channels for corrective actions.

For more reading on Serverless360 Logic App management capability, refer to this document.

We'd love to hear your thoughts
Please visit our feedback system to suggest new Features or Enhancements. You can also take a look at our Roadmap
Was This Article Helpful?

We use our own and third-party cookies to understand how you interact with our knowledge base. This helps us show you more relevant content and ads based on your browsing and navigation history.